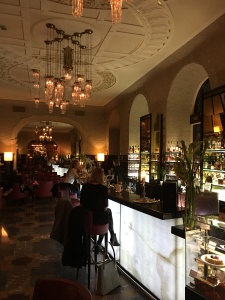 The cocktail scene in St. Petersburg is a bit odd. It seems the city is about 25 years behind in their approach to drinks. I didn’t get to every bar, obviously, but I checked out those I missed online and many seem to focus on the stuff people were doing a long time ago. When one of the top bars in the city has a mojito on its main website page, things aren’t looking particularly interesting (with nothing against mojitos). Another supposedly decent cocktail bar claimed to be the place where “the beautiful people of St. Petersburg converge”. The whole thing really does scream early nineties in North America.

Anyway, the best bar I visited was the Lobby Bar at the venerable Grand Hotel L’Europe. It is a truly special place, with an eclectic but functional mix of Art Nouveau and classical Russian design. The cocktail menu comes on an iPad, which is where things started to go wrong. The bartenders are very young, though professional and friendly. With such a stunning old bar, I expected to find refined, if not slightly surlish, old world Russians behind the bar. Things really went downhill when my martini inexplicably arrived with lime juice. Lime juice! And then the bartender had to refer to an instruction book to make one of their house drinks, which I thought was strange. All that said, once I provided specifics, things looked up from there.

So, despite mediocrity on the drink front, as one of the world’s truly special hotel bars, The Lobby Bar cannot be missed.

There was an error retrieving images from Instagram. An attempt will be remade in a few minutes.