[August 9th, 2018] The cocktail scene in Las Vegas is as odd as the city itself. I’m really not quite sure what to make of it to be honest. Considering the city’s 24 hour obsession with drinking and all things bon vivant and villainous, I’m actually surprised the cocktail scene isn’t better. I went to six of the reportedly best bars in the city and didn’t really find any to which I would return other than the famous and venerable Golden Steer steakhouse. I guess one way of looking at it is the cocktail scene is in keeping with the superficial veneer found in everything in Las Vegas, as if the whole of one’s experience in the desert is a mirage. 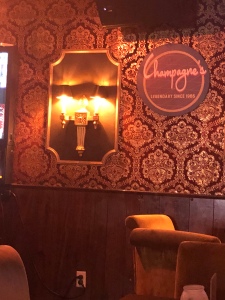 Champagne Cafe: I gravitate to authentic and original whenever I travel. This is especially true when it comes to bars. My trip to what is essentially a total dive bar in a strip mall well off the beaten path in Vegas was no exception. I knew things would be interesting when my Uber driver asked me if I was sure I was in thr right place when he dropped me off. It was and I’m glad I got to experience one of the city’s original cocktail bars that is essentially unchanged since the early sixties, when Vegas was just slightly less grandiose than at present. The bar is really just a long line of slots and the drinks are, well, interesting. I ordered a Vesper and let’s just say what arrived was nothing like what I had at Dukes in London where Ian Fleming created the cocktail while writing Casino Royale. There was also a lot of smokers, which is always a bit of shock for me. Anyway, go if you’re in Vegas and you want to see what drinking was really about before the glitz and kitsch of the strip took over. 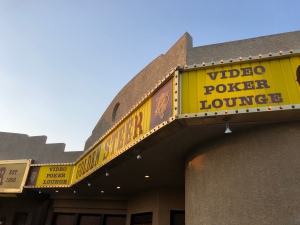 The Golden Steer: Wow. This is about authentic as one could ever expect of any restaurant or drinking establishment. We sat in Elvis’ booth, and I’m being completely serious. He literally sat in the exact same red leather seat and ordered “extra greasy” steak hamburgers twice a day whenever he was in the city. Crazy. The deep and rich decor of the late fifties is unchanged and totally amazing. The steakhouse food was absolutely incredible, as was my gin martini with giant olives. I, like The King, would eat and drink here exclusively if I’m ever back (and could afford it). 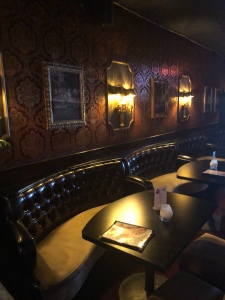 Velveteen Rabbit: More than anything, don’t miss this bar because it’s a reason to head to downtown Las Vegas. Not knowing much about the city, I always assumed Vegas was created at the strip. I was therefore very surprised to learn that the original Vegas was a cluster of frontier town buildings several miles away from all the current action. The area is apparently being restored and revitalized after years of neglect. I was happy I got the chance to see it. I also went as an homage to my two standard poodles whom I affectionately refer to as velveteen rabbits whenever they get groomed. Anyway, this bar was as close as I think one will ever get to a true cocktail bar in Vegas. The bar menu was adventurous and interesting. Alas, my burdock-infused mezcal drink was almost undrinkable. I give them an A for effort, though, and would encourage anyone to give it another try.

Petrossian Bar at The Bellagio: Despite being square in the lobby of the unbelievably garish lobby of the unbelievably garish Bellagio Hotel, this version of the amazing bar in New York (which I’ve also visited) might have actually been the best drinking experience of my brief stay in the city. I kept it simple with a martini and though I desperately wanted to break the bank on some Beluga caviar, the overall experience was excellent. That said, I did feel badly for the woman trying to play the beautiful grand piano as the literally thousands of tourists in the lobby only thirty feet away made enjoying her music impossible.

Rosina Bar at The Venetian: So many of the bars in Las Vegas sit within the endless and cavernous casinos found at every hotel. I was a bit shocked to find noisy slot machines within ten feet of what was supposed to be a great bar. Anyway, though the Rosina Bar is surrounded by the casino of the The Venetian, it is its own space and is serenely and beautifully appointed. It seemed more respite from the gambling madness than participant. Thank God.

The Dorsey at The Venetian: I had fairly high expectations of The Dorsey when I heard Sam Ross of Attaboy and Milk & Honey fame was involved. Unfortunately, The Dorsey in my mind is the exact opposite of the The Rosina above. Totally and very intimately embedded in the hotel’s casino, I actually can’t think of a place in which I would less want to drink. So I didn’t in the end, and left.

There was an error retrieving images from Instagram. An attempt will be remade in a few minutes.