This is my first ever totally hypothetical post. In no way am I actually attempting any of what is described, but if I were, it would be as written. The distillation of spirits is banned in all western countries except New Zealand. The idea was originally to protect the public from creating dangerous substances with uncontrolled ethanol concentrations and toxic byproducts. The reality, however, is that the laws protect the monopolistic tax revenues enjoyed by governments. I considered distilling my own gin but felt the risks exceeded any potential benefit. What follows below, if I were to do it, is how to utilize alcohol as a solvent to distill flavour and aroma for the creation of astounding ingredients for cocktail-making. 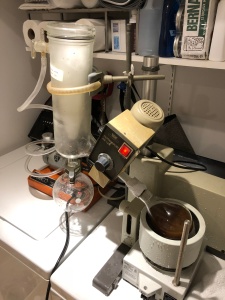 Laboratory rotary evaporators are more and more being used in high-end kitchen and bars to distill flavour and volatile aromas for ingredient preparation. Check out the incredible work of chef, Nils Noren at NYC’s Aquavit with rotary evaporation in his kitchen (cooking issues). I was first introduced to the idea via the cocktail book from 69 Colebrooke Row in London, which I have visited and which is annually considered among the best bars in the world. Crystal clear distillates can be created from limitless ingredients added to ethanol (vodka). The results are nothing short of breathtaking, and can transform an ordinary drink into something one will remember for a lifetime. Examples include adding dried lichen, flint and kaolin clay to vodka to create a clear distillate that literally tastes like earth, much the way wine assumes these flavours through the concept of terroir.

The science behind a rotary evaporator is simple, ingredients and vodka are added to a pear-shaped distillation flask which is rotated on an angle at a decent speed in a water bath kept at between 40 and 60 degrees Celsius. See photos. The alcohol in this mixture boils in the bath, generating a flavoured vapour that, under a vacuum, eventually comes in contact with a super chilled (dry ice in rubbing alcohol) distillation column where is condenses. The flavoured, condensed liquid then collects in a collecting flask. Nils Noren describes the process this way from the site mentioned above:

The Purpose of Rotary Evaporation
In both traditional chemistry labs and our culinary technology lab, the rotary evaporator, or rotovap, is an instrument used to distill a solvent. (Everyone calls it a “rotovap” even though rotovap is a brand name). The purpose of distillation is to separate a given mixture into its components based on their respective volatilities, through the process of evaporation and condensation (liquid-gas-liquid).

We use the rotovap for two main purposes: 1) to concentrate non-volatile components in a mixture (for example, concentrating the purest and freshest flavors from a blood orange by removing the water), and 2) to extract the volatile aroma and flavor molecules from mixtures gently and at low temperatures (for example, extracting the desired flavors from a blend of alcohol, herbs, and fruit without heating the mixture up).

The key to understanding any distillation is to remember that it is a separation. Sugars, acids, colors, and most bitter compounds are separated from aromas, alcohols, water, and small flavor molecules, etc. What is phenomenal about rotovap distillation, as opposed to standard distillation, is that it can separate food compounds from one another without altering them.

Two key components of the rotovap allow for a gentle, precise, and efficient distillation not found in conventional distilling apparatuses: 1) the solvent is removed under vacuum, which lowers its boiling point, eliminating the need for high-temperature distillation, and 2) the rotation of the evaporating flask, immersed in a heated water bath, increases the surface area of the product, greatly speeding distillation and also, through forced convection, keeping the mixture evenly mixed and heated to promote stable, even evaporation.

An additional benefit of laboratory-type stills over Uncle Jesse moonshine-type pot stills is that laboratory condensers, being sealed and made of glass, are easy to visually monitor and adjust. We can, therefore, recover almost 100% of the solvent.

While scientists are almost solely concerned with the residue left over after the solvent has evaporated, we are proud members of the minority interested in the distillate itself. What they call a solvent, we call flavor. To this end, we have redesigned a mid 1980’s vintage Buchi Rotovap EL-130 and tailored it to our culinary endeavors. Therefore, beware! The primer that follows is not a standard rotovap primer. It is a primer for those individuals interested in distilling not petrochemicals, but gin. 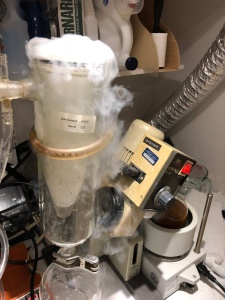 The big problem with this seemingly magical process is that a new rotary evaporator with all necessary glassware and equipment costs around $10,000 CAD. If you’re anything like me, this definitely represents an impediment to including it in your barware repertoire. That’s where eBay comes in handy. I was able to pick up a used Buchi Rotavap for just under $200, a used water bath for $40 (they said it wasn’t working but it was) and a used, adjustable vacuum pump for $100. That’s still a lot of money but way, way less than $10,000. This is also my hobby so I don’t mind that kind of expense if it’s something I will use forever. The key when searching for a used Rotavap is to make sure all distillation glassware is included and in good condition as it’s the glassware that costs the big bucks. Flasks, on the other hand, are cheap, especially from China on eBay. Buying the distillation glassware separately or new will cost a fortune. Many of those listing on eBay don’t seem to be aware of the true valuable of this type of glass.

So… after much stress and consternation, I hypothetically loaded up my system with ground ambrette seeds ordered on eBay from India (such an incredible aroma), pink peppercorns and vodka and then hypothetically started the process. See photos. In the end it hypothetically worked, though not at the rate I expected. I hypothetically began by using an old surgery suction pump from my veterinary hospital, and modified a black rubber stopper to make the distillation flask fit when it didn’t. This hypothetically lead to wobbly rotation, low vacuum pressure, uneven heating and an end product that tasted suspiciously like boiled black rubber. Anyway, I purchased a proper flask on Amazon and am currently waiting for a used, adjustable vacuum pump intended for rotary evaporation to arrive.  More, therefore, to follow.

All in the pursuit of the best drink of my life, and without question the most expensive…