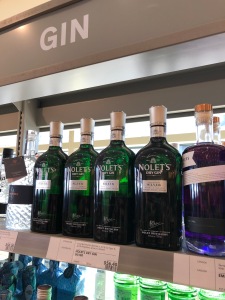 Gin at the LCBO

[February 19th, 2019] My last post featured Malacca Gin, relatively new and available not only at the LCBO here in Ontario but worldwide. Not long ago, Nolet’s Silver Gin from Holland, literally the consensus greatest gin in the world, also suddenly showed up on the shelves of the LCBO. I almost fell over as I used to barely be able to find this gin at the top liquor stores south of the border. It is worth mentioning on this site most importantly as a means to say spirits at the LCBO have really come into their own. As I mentioned in the last post, when I started into the world of cocktails, the LCBO listed maybe 8-10 gins, and almost only the basics. Hendricks was maybe the best they had on offer. A recent online search revealed 145 gin products on the LCBO site. Not all are are regular stock but many are, and they include the following standouts:

To think they’re now selling something as uncommon and incredible as Nolet’s is beyond comprehension. Nolet’s is literally the martini gin. Nothing else compares and I’ve tried hundreds. And now, many of us can finally pick it up around the corner (though it does cost nearly $60…).

One word of caution, the number of Canadian gins has exploded of late and despite their often beautiful bottles and labels, the stuff inside is most often lacking. I’m very suspicious of all these new local gins flooding what has become a gold rush market. I’ve tried a few and they completely lacked depth and flavour. Some could even be described as awful. Spirits are expensive so until we hear otherwise, I would recommend sticking with an established product. Like, for example, Nolet’s Silver!