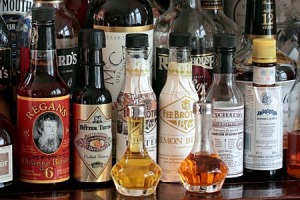 In my mind, the addition of bitters almost always makes a cocktail better.  I’m a huge fan and make a lot of my own bitters as well as having amassed a decent collection.  That said, I use:

90% of the time, making the rest of my collection feel lonely and neglected.  A bottle of bitters will set you back nearly half the cost of a bottle of spirits so my feeling is if you’re on a tight budget (who isn’t?), put available funds towards liquor and stock only the list above (maybe include a mole or chocolate bitter as well and something citrus that isn’t orange like lemon or grapefruit).

Making bitters is easy and fun.  You have access to bittering herbs no matter where you live in North America, as they can be purchased in both countries online (see sources).  Frankie Solarik at Barchef in Toronto was the first person to introduce me to the concept of making bitters.  His approach, outlined in his Barchef book, is more straightforward and less bitter than those you will find online.  He uses quite a bit of cardamom in his recipes, which contributes a pretty dominant East Indian feel.  This works in his creations but can be out of place elsewhere.

The basic bitters ingredients can be divided into three components: the base spirit, the bittering agents and the flavouring agents.  I generally use gin for ‘light’ bitters and rye for dark.  Vodka is also called for in some recipes though, as everyone knows by now, it won’t contribute flavour to the final product.  The basic bittering agents include quassia bark, gentian, wormwood and dried citrus peel.  As with syrups and infusions, the sky is the limit for flavouring agents.  I have used fresh herbs, dried herbs, dried fruit, spices, cacao nibs and fruit juices but the reality is you’re only limited by your imagination.

At present, I have the following homemade bitters on my bar:

Unless you own a bar, make small batches as they last indefinitely and unless you’re a booze hound, it will take you a decade to go through a bottle.  I use medium-sized mason jars in which to make my bitters.  Remember that you will need room in the jar to be able to shake the ingredients regularly.  See the Cocktails section of this blog for my experiments with bitters.

Other bitters in my collection include:

It’s probably worth noting that Fee Brothers Bitters are in many cases more a flavouring than a true bitter.  I know a number of bartenders who refuse to use them because of this fact.  Often glycerin rather than alcohol-based, they rub some the wrong way.  I try to keep an open mind, however, and have found they can accentuate in ways other ‘bitters’ cannot.  The Rhubarb, Old Fashioned Aromatic and Black Walnut products in particular, are quite beautiful.